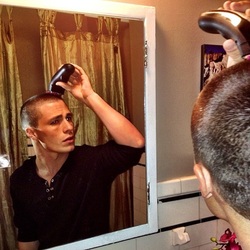 Colton Instagramed this picture of himself shaving his head.

Few months ago, a blogger named Brian Tutt has published on his blog about Colton Haynes‘ talks with Lionsgate people. You can read that post here. Now, thehob.org has caught up with him at the 2012 San Diego Comic Con and the Teen Wolf actor confirmed that he did audition for the role but Finnick is yet to be cast. Accordingly, Colton has expressed how a big fan he is for the series via his tweets.

Colton was spotted holding the third book of the series Mocking Jay during this youtube video. 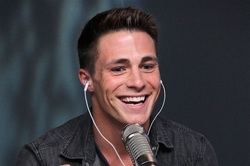 “Teen Wolf” star Colton Haynes stopped by the “On Air with Ryan Seacrest” studio on Wednesday to talk about when his character’s Master will be revealed on the show, stealing his brother’s girlfriend, and answers a few juicy questions during a friendly game of Truth Pong.